A collaborative and evaluative study conducted by members of the Chorus Team at Brunel University and social media representatives from a leading bio-pharmaceutical company who distribute blood glucose monitors (BGM) as part of their treatment portfolio for people living with diabetes. This study takes data from Twitter to attempt to answer questions of genuine interest to this sector of the medical device market, conducting a small-scale (one day) analysis in order to ascertain any valuable insight may quickly and easily be drawn from the data collected. Data was collected, using the Tweetcatcher, over a 10 week period during 2013 and all analyses were conducted using Tweetvis.

Brief Summary of Findings and Recommendations

Twitter proved to be a surprisingly rich source of discourse around the topic of blood glucose monitoring and management. Whilst constructing effective keyword queries proved difficult – acceptably precise queries tended to provide low recall and were dominated by spam – it was still possible to draw out some useful insights relevant to the questions.

Some interesting themes that were quickly identified within query keyword datasets (i.e. “strips AND glucose”, “glucose AND tests” and “glucose AND (device OR monitor OR meter)”) included: 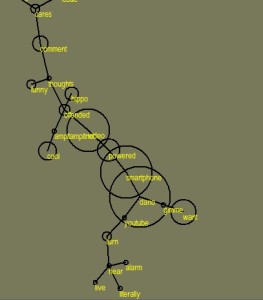 The perceived benefits were that this would remove the burden of carrying an extra device whilst providing the facility to readily aggregate and monitor glucose levels over time. There was also much excitement over the rumours that Apple were going to release an iWatch, complete with sensors to monitor glucose continuously without the need for needles 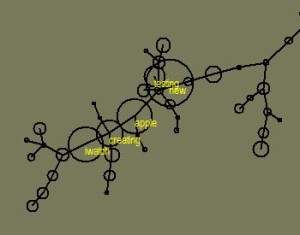 A more successful strategy was to retrieve the recent timelines of users who followed a popular information service, in this case an account run by a diabetes safety campaign – @StripSafely. We call this strategy “User Following”. User following avoids the need to specify keywords. This is particularly useful for anthropological research – why would a diabetes sufferer mention their condition or related activities specifically every time they tweeted about it? The trade for improved recall is precision, but with sufficient numbers of users in the sample, the key themes tend to bubble to the surface and can be readily identified in the visualisations and statistics provided by Chorus, enabling the analyst to filter their dataset to pursue a more in-depth analysis. This approach revealed the following insights:

The @StripSafely dataset (n = 182809) was filtered down within Excel to only include tweets containing the #dsma tag. This reduced the set size to n = 11880. From this reduced set we found:

This post is only an abridged version of the method and findings of the above study. If interested, please direct any enquiries to team@chorusanalytics.co.uk